Cloning Windows system to SSD drive can help speed up Windows computer. This post will show you how to clone Windows system partition or disk to SSD in Windows 10/8/7 and how to boot from the destination disk.

If your Windows system has installed on the mechanical hard disk drive (HDD), and the computer is struggling to load some large files or run many applications simultaneously, you can upgrade the computer HDD to SSD to speed some things up a little because the data read-write speed of SSD is much faster than HDD.

To use SSD as an OS disk, you can clean reinstall Windows onto SSD, but you will need to back up all personal files, add the new SSD drive, reinstall OS and other programs on it, and set everything to the way it was. It is time-consuming and troublesome! As a workaround, you can directly clone the already installed Windows system to SSD instead of reinstalling everything from scratch.

Actually, copying Windows system to SSD will be an easy task as long as a professional OS cloning utility is chosen to help. In the software market, countless cloning software is available. Here we strongly recommended AOMEI Partition Assistant Professional for Windows 10/8/7 (64 bit and 32 bit). This software provides the following two methods to help you clone either the Windows system drive or the entire system disk to SSD drive.

1. Only clone Windows OS to SSD: only migrate only Windows 10, 8, 7 partition to SSD, and leave the rest data partitions on the old hard disk.
2. Clone Windows system disk to SSD: copy every partition (OS partition and other partitions) from one disk to SSD drive.

No matter which method you finally choose to clone Windows OS to SSD, you can do the following further operations:

◆Aligning SSD partitions to optimize SSD performance further.
◆Resize SSD partition in the Windows system to SSD clone process.
◆Clone larger OS drive/disk to smaller SSD as long as it has enough space to hold the used sectors of the OS drive or disk.
◆Boot from the cloned SSD drive after clone.

Now, back to the most important point-how to clone Windows operating system to SSD in Windows 10/8/7 via those two different methods. Download its Demo version and check out the how-to guide below.

What you need to do before clone:
1. Back up your system in advance just in case something uncontrollable occurs during the process such as power outage.
2. Move everything important on the SSD drive to another location since the Windows system clone will erase all contents on it.
3. Shrink your system drive or disk to make it as small as possible and better fit on the SSD since SSD drives usually have less space than HDDs.
4. Connect the SSD drive to your computer and make sure it is detected successfully.
>>If you are using desktop, you need to open the case and hook up the SSD to motherboard.
>>If your computer is a laptop, you have to connect SSD via USB port and the SSD should be put in a USB adapter.

If you want to clone only the Windows system partition to SSD, try “Migrate OS to SSD” Wizard.

1. Install and open AOMEI Partition Assistant Professional. Choose “Migrate OS to SSD” in the left panel and click “Next” in the pop-out window.

3. In this window, you can resize partition as you need, then click “Next”.

4. A note on how to boot from the destination disk will appear, read it carefully and click “Finish”.

If you need to clone the entire Windows system disk to SSD, try “Disk Clone Wizard”.

1. In the main interface of AOMEI Partition Assistant Professional. Click “All Tools” and then “Disk Clone Wizard” on the left side. 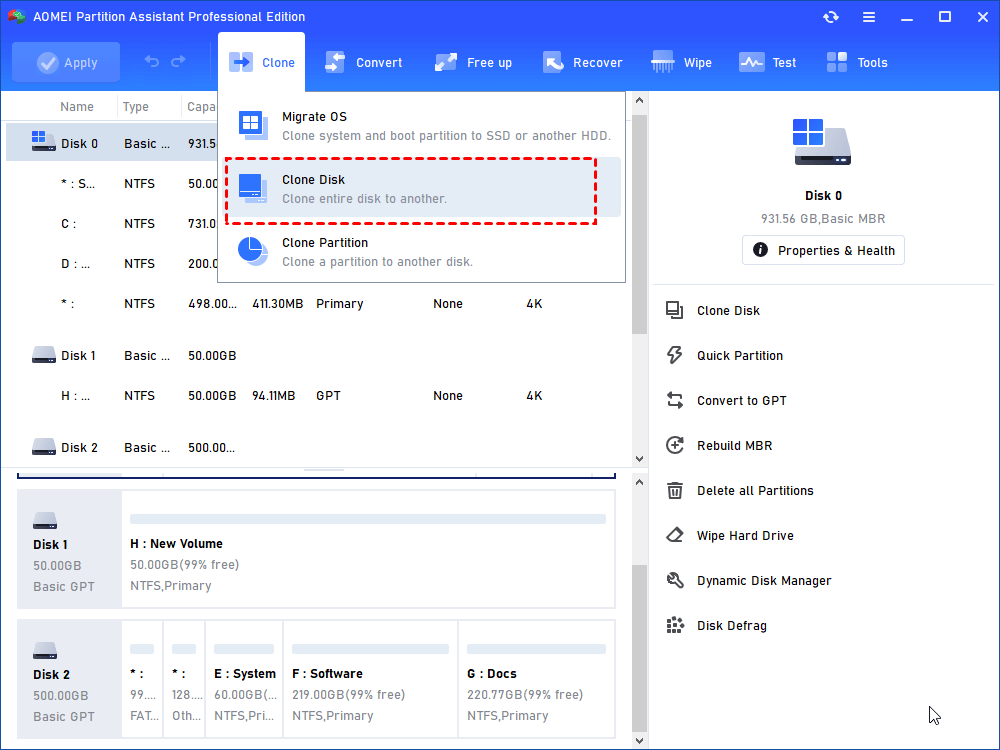 3. Select the Windows system disk as the source disk and hit on “Next”.

4. Then select the SSD drive as the destination disk and click “Next”.

5. Now, you can also resize partition just being created on SSD drive.

How to boot from the SSD drive after clone?

After you have cloned Windows system to SSD drive successfully with either method, now you need to change the boot order in BIOS menu to boot Windows 10/8/7 from SSD.

1. Restart computer and constantly press F2 key (or other keys like Del, F8, F12) to access the BIOS menu.

2. Use the arrow key to select the Boot tab. System devices will appear in order of priority.

3. To give the cloned SSD a boot priority over other hard drives, move it to the first position in the list.

4. Save the changes and exit the BIOS setup utility. The computer will restart from the SSD successfully.

Further tip: If you are cloning Windows system drive or disk from MBR to GPT, or GPT to MBR disk, you will also need to change BIOS boot mode to UEFI, or UEFI to BIOS.

With AOMEI Partition Assistant Professional, you can easily clone Windows system to SSD and then successfully boot from the cloned SSD drive. Besides, if you want to copy Windows system to USB as a portable Windows device to take everywhere, its “Windows To Go Creator” can satisfy you best. To clone Windows Server operating system drive or disk to another HDD/SSD, please try AOMEI Partition Assistant Server.

You May Also Like
How to Clone Windows 10 to UEFI SSD Drive Successfully?
Free Bootable USB Clone Tool: Copy Bootable USB Drive in Windows
How to Copy OS from Laptop to Pen Drive and Make It Bootable?

Have your problem been solved? If not, please input query in the search box below.